Zhang Feng is a Dealer in Armored Warfare. His dealership's symbol is a dragon.

The low-tier Chinese tanks offered by Zhang share many characteristics with their Russian counterparts, whereas the high-tier vehicles tend to be more agile, but less durable than other Main Battle Tanks of the same tier. He also has a multi-class branch which features many Armored Fighting Vehicles from Eastern Europe, and are generally considered as mid- to long-range fire support vehicles.

Last but not least, Feng is the only dealer who currently sells Self-Propelled Guns.

Zhang was first available as the game's third dealer with Chinese tanks on February 26, 2016.[1] On April 20, 2017, the Chinese tanks underwent de-tiering, and all Self-Propelled Guns were moved to his catalogue from Sophie Wölfli and Marat Shishkin.[2] Finally, more Chinese vehicles and a new branch featuring European vehicles were added in a new update on November 16, 2017.[3]

Originating from China, Zhang showed a knack for working with technology and electronics from childhood on. Later in life, he ended up graduating from BIT's School of Materials Science & Engineering, before working with a handful of classmates to build a military technology business, where he took a position as head researcher.[5] 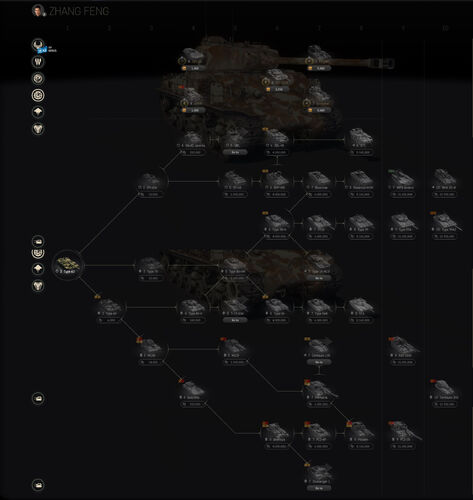