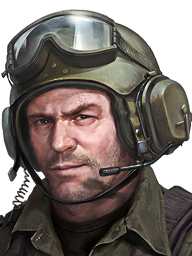 Viktor Kirsanov is a progression commander in Armored Warfare. As an entry level commander, he can be unlocked via the BMD-1 or BMP-1's upgrade screen.

Although a majority of his skills are intended for use in Main Battle Tanks, Viktor is a universal commander who can be configured in several ways. He has defensive skills that can improve module protection, and conditional offensive skills that only activate when his vehicle's hit points fall below 50%. He also has multiple skills that can increase damage against vehicle modules or crew members for universal usage. Alternatively, Viktor can be configured to boost mechanized infantry stats for a different play style.

Viktor had a hard childhood in the northern forests of Russia. He enlisted in the army at an early age and quickly rose through the ranks, earning acknowledgement and praise for his combat acumen. He left the military after suffering injuries from an IED attack during a relief mission, but returned later as a contractor after realizing he missed military life.