Sophie Wölfli is a Dealer in Armored Warfare. Her dealership is symbolized by five diamonds arranged in a "W" shape.

Wölfli offers a variety of vehicles. The American tanks have average performance with no significant advantages or weaknesses, whereas the German Leopard tanks have weaker armor, but boast in accuracy and penetration. Her other vehicles, while being less armored, tend to feature good accuracy for long range fire support, or have excellent vision range and camo factor for reconnaissance.

Together with Marat Shishkin, Sophie Wölfli is one of the earliest dealers available in the game. New vehicles were periodically added to her pool throughout the game's early developments between 2015 and 2016. Her vehicle pool underwent significant tier and roster changes as a result of Balance 2.0 on April 20, 2017.[1][2] Small changes and addition continued to apply at infrequent intervals - the last change occurred with the addition of Leopard Revolution in September 2018.[3]

As a former diplomat for Western Europe, Sophie Wölfli used her many connections to build a large network of vehicles available for purchase by PMCs. 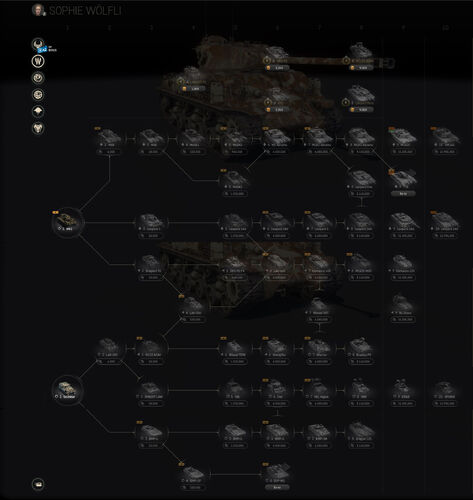