Sol Schreiber is a Dealer in Armored Warfare. His dealership's symbol is an owl.

This dealer is intended to be beginner-friendly, as all of his low- to mid-tier vehicles earn

Experience twice as fast as other tanks in the same tiers. His Israeli tanks are generally well-rounded vehicles that are forgiving to use, with low-tier and Magach series leaning towards sniping play style within the confines of the MBT class, and the Merkava series enjoy all health pool and ready rack mechanism. Furthermore, Schreiber's branch allows players to unlock other dealers' vehicles in progression via his own vehicles, or to unlock temporary (rental) vehicles of higher tiers for test play before they get to purchase them.

Sol Schreiber became available as the game's fifth dealer on September 6, 2018.[1] In December of the same year, his tech tree underwent minor adjustments, where Sho't Kal Dalet was re-tiered from Tier 2 to Tier 4.[2]

Solomon Schreiber is one of the most efficient agents of the Israeli Defense Forces procurement agency, he deals in both the export of IDF vehicles and the import of modern military technologies from all over the world – from cutting edge military laboratories to defunded old bases hiding technical marvels of the old world, nothing is beyond the reach of Sol’s agents.

He often likes to say that his friends call him “Sol” – but make no mistake, none that do are his true friends. His outgoing appearance hides a calculating mind set on a single objective – the advancement of the state of Israel.[3] 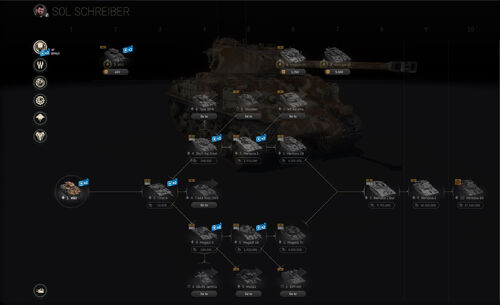