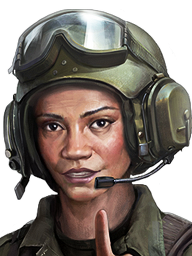 Sabrina Washington is a progression commander in Armored Warfare. As an entry level commander, she is available to all players from the beginning.

Sabrina has skills that focus on concealment and scouting, making her suitable in lightly armored classes such as Armored Fighting Vehicles and Light Tanks. On the other hand, her basic skill, Anti-Material Explosives IV, offers significant increase in module damage, which complements vehicles with heavy module damage output like FV4034 Challenger 2 ATDU.

Sabrina grew up enjoying the beaches of sunny San Diego, thanks to her father's career as an electronics specialist for the Pacific Fleet. Although a talented musician, she opted to join the US Army after college, displaying an aptitude for strategy, intelligence and tactics. Driven and goal-oriented, Sabrina's methodical, although sometimes inflexible mind serves her team well.