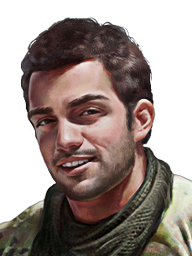 Rashid Al-Atassi is a progression commander in Armored Warfare. He can be unlocked via the BMD-1P or BMP-1P's upgrade screen for

Rashid has skills that help improve ATGM control and reload speed, making him ideal for many Armored Fighting Vehicles and Tank Destroyers that rely on ATGMs to deal damage. His other skills are more varied, which range from mobility buff to increasing fire chance on vehicle engines.

Growing up in war-torn Syria, Rashid quickly learned what it took to survive. When his family was killed, Rashid was forced to flee the country, and soon thereafter found himself in the Egyptian military, where his rough edges were finely polished. Although he always seems calm and projects confidence and courage, a dark desire for revenge fuels his tenacity in battle.