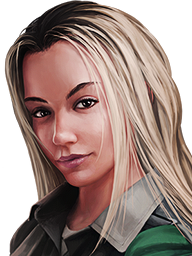 Rachel Kramer is a progression commander in Armored Warfare. She can be unlocked via Tiran 6's upgrade screen.

Rachel is a Main Battle Tank-oriented commander. Her basic skill increases reload speed for every enemy vehicle present within her vehicle's vicinity, and she can further boost the reload speed with Deadly Explosives skill by destroying enemy vehicle modules or with other conditional skills. Her other supporting skills help improve mobility as well as mitigating negative effects from incoming attacks.

Born and raised in Israel, Rachel served in the IDF. When she left the Israeli army she moved to the United States where she worked for various military companies (many of which did not have very savory reputations). She then met Alexander Cortez and agreed to join his forces.