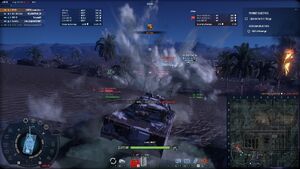 PvE stands for Player versus Environment and is one battle mode available in Armored Warfare, the others being PvP and Global Operations (Glops). In PvE mode, teams of 5 players fight AI-controlled opponents. Each contract is available for a certain period of time, during which the players can complete the missions, learn new tactics and receive rewards.

A key feature of the Mission system is team coordination – the success of each mission depends on cooperation between all the players fighting together. Unlike PvP mode, in PvE every player has to understand their part and role in battle – without cooperation the team cannot succeed. Both game chat and quick commands can be used for effective communication while coordinating team efforts. 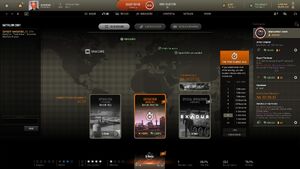 Starting a PvE battle works the same way as starting a PvP battle. First the player selects a vehicle from those available in the garage and then they click the "Mission (PvE)" button. Players can also join the PvE queue in a platoon of up to 5 players.

Most of the missions require the teams to consist of various classes. The more complicated the mission, the more important this requirement is.

There are four difficulty levels: easy, medium, hard, and insane. The missions remain the same objective-wise, but some of the parameters will change: the number of opponents and their vehicle tiers, time limits etc. The difficulty level can be selected individually for each map and map sets are changed every day.

Starting from update 0.13, missions above the Easy level will have a Logistics Cost, depending on the level of the tank and the difficulty of the mission. This works like an entry fee.

After selecting a mission and a difficulty, you get placed in a mission with 4 other player if you're solo, or in with your team if you're platooned, with the team adding up to 5 players. There are currently over 30 missions. 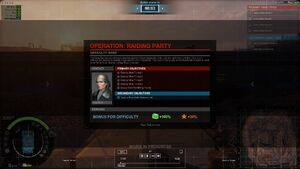 Players are rewarded with reputation points and credits for successfully reaching objectives. Players will receive a smaller reward even if the mission was not successful. There are three types of objectives:

There are various types of objectives in the game, including defending certain areas, destruction of enemies, or the capture of certain objects. All the objectives are displayed on the minimap as well as the player screen.

All objectives are divided into types:

All the Vehicles work the same in PVE as in PVP, but have access to an additional 4th consumable Slot, which is used to store either a vehicletier dependant repair kit, that restores 20% of the Maximum HP that the Vehicle has, while also replenishing the Ammo, or the Field rebuild kit, that either repairs the vehicle to 100% health, and also replenishes the Ammo, or, in the case the player died, be used to get back into the running Operation, with 60% health restored, and full Ammo.

Missions are the Player vs. Environment aspect of Armored Warfare. In missions, four to five players battle in a scenario against AI controlled enemies. These missions have a story line based narrative where the agent gives primary and secondary tasks. In order to successfully complete the mission, players are required to complete the primary mission and at least one player must survive the mission. Surviving and secondary objective completion give significant boosts to reputation and credits.

In addition to these regular enemies, player have a chance to face a mini-boss that are identified by having Lieutnant or Officer as a Name Suffix. These vehicles are significantly more difficult to destroy than the normal vehicles. They appear to have higher levels of armor and several times more hit points than the regular enemies. The chance to spawn these mini-bosses increase with tier and difficulty.

There are a Number of Vehicles, that are more dangerous than others to most Player vehicles because of their Pinpoint Accuracy Missiles, these are listed below:

List of and link to missions, as well as the PvP maps they are based on. All PvE maps start with an "Operation:" prefix. For example, "Operation: Ghost Hunter".

This kind of PvE Mission has been added with the Update 0.23 "Caribbean Crisis", and consists of a set of Missions that can only be played one after another (But if the leader of a Platoon is on the first chapter of a certain set of missions, the rest of the platoon could already be on the 2nd chapter, and they still could go into battle (but not the other way around)), and also only come in 2 difficultys: Fighter, wich is roughly equal to the medium difficulty, and Insane, wich is equal, if not above the difficulty of hard. Also, these missions feature additional mechanics that are tied to the completion of secondary objectives. Furthermore, these missions have a unique x4 for the 1st victory, that unlike the "normal" x2, doesn't reset every night, but instead resets every 3 days.

There are 4 Sets of Special Operations Chapers: