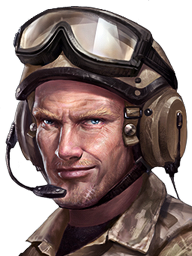 Philipp Holzklau is a progression commander in Armored Warfare. As an entry level commander, he is available to all players from the beginning.

Philipp is a defense-oriented commander suitable for Main Battle Tanks, with his basic skill increasing module repair speed, and many of the adjacent skills help improve module durability or mitigate negative effects from battle damage. Although he does not perform as well as other specialized commanders in offensive roles, Philipp nonetheless offers some offensive skills in each corner of his skill field.

This former artillery officer served with NATO forces in his youth, but was eventually dishonorably discharged for causing trouble off-base. Although he shows poor judgement in his personal life, he is steady and confident where it counts. Philip is irreverent and cocky, backing up his brazen attitude with positive results on the battlefield.