Oscar Faraday is a Dealer in Armored Warfare. His dealership is symbolized by a cobra.

Faraday's catalogue has no low-tier vehicles, and rather than organizing into straight progression lines, his vehicles are mostly sorted in pairs. Most of Faraday's vehicles come with relatively unusual traits or play style. As such, they are intended for advanced players.

Faraday first debuted as the game's fourth dealer with his assortment of light support vehicles in March 6, 2018.[1]. His second group of vehicles feature a variety of American experimental vehicles, which became available in September 24, 2019.[2]

Born in Warwick, Great Britain, Oscar Faraday is the epitome of a British gentleman. But don’t let his smooth look and calm demeanor fool you – he’s one of the most dangerous people on the planet. Trained by the famous British MI5 secret service, he learned to appreciate finesse, preferring stealth over brute force during his decades-long career as His Majesty’s cold-hearted killer.[3] 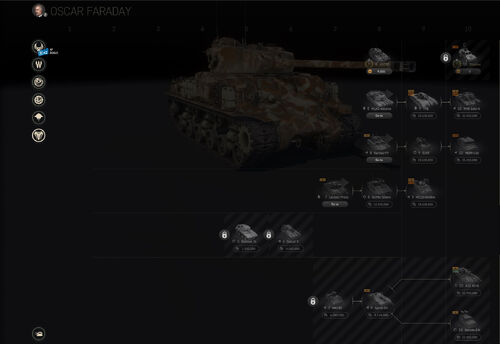