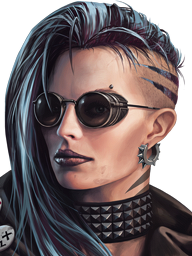 Ophelia Kitescu is a premium commander in Armored Warfare. She was first available as a reward in Age of Rage Battle Path[1]. She returns as a purchasable commander on MY.GAMES Market periodically.

Unlike most commanders, Ophelia starts off with three skills, but they do not increase in potency as she levels up. Her skill field is largely divided into three areas: firepower, mobility, and defense. Some skills only activate when her vehicle is moving above a certain speed, and others offer high bonus in some aspects but with trade-offs elsewhere. One of Ophelia's starting skills, Tanks Don't Die, allows her vehicle to withstand one fatal blow from enemy fire, restore all damaged modules and injured crew members, replenish ammunition, and erect a shield that absorbs a certain amount of damage for a short period of time, before reducing remaining hit points to one. This skill allows her to make a comeback or retreat wherever necessarily in desperate situations both in PVE and in PVP.

At the age of 16, Ophelia ran away from her foster parents and got caught up with an armed criminal gang. Over the next 9 years, she took part in assaults on corporate offices and kidnapping of civil servants. At the end of 2042, Clayburn Industries defeated and destroyed Ophelia's gang. Since then, she's been looking for new brothers in arms to fight corporate oppression.