Mechanized Infantry is the new features in Update 0.30 that provide 3 types of infantry squads (1 for Merkava 4 and 4M) and can be activated by choosing them at vehicle's special ability in the garage and press E to drop squads. 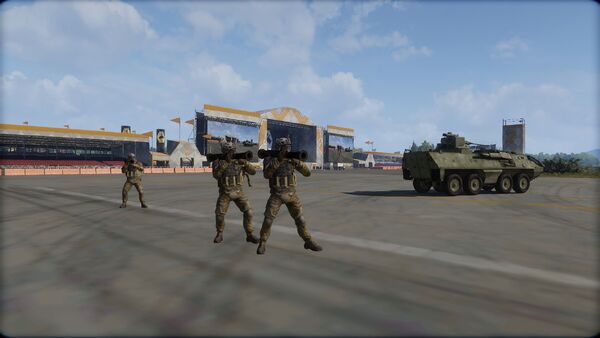 The Anti-Tank squad consists of several troopers armed with rocket launchers. Once deployed, it will start firing these rocket launchers directly at enemy targets in devastating volleys at low to medium distances. The entire squad usually engages a single target but if some troopers cannot engage the target the rest of the squad is firing at, they will choose a different one. Their projectiles aren’t especially accurate and fly quite slowly, but at short distances they can seriously hurt pretty much any armored opponent save from the heaviest ones. They can also engage other infantry, although they prefer to fire at enemy armor. 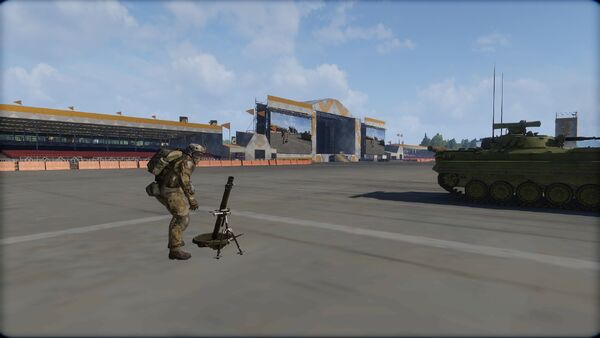 The Mortar squad is essentially your own pocket artillery. As its name suggests, it’s a couple of blokes with a mortar, firing HE shells with a lot of splash as well as bonus module damage at everything in their vicinity. These shells are accurate but not especially difficult to evade given their high arc. If a static light target gets under fire, however, it should probably move away very fast or risk destruction. Given how a mortar squad fires indirectly, it’s entirely possible to deploy it behind a hill and watch the fireworks. 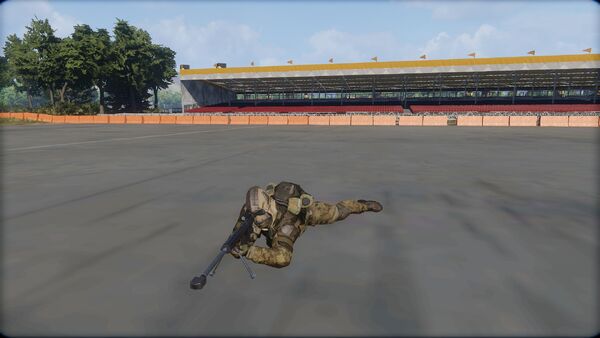 The Sniper squad (or solo Sniper). Snipers are essentially scouts and infantry killers. Each team consists of a spotter with advanced spotting equipment and a sniper with a massive Barrett .50cal rifle. They can make short work of any deployed enemy infantry (when there’s an enemy infantry unit in sight, the snipers will always target it over enemy vehicles), but that’s not their only purpose. They are also extremely stealthy and have high viewrange, allowing them to see over vast swathes of map space, foiling enemy plans to sneak around your lines in a heartbeat. Moreover, when firing at armored vehicles, they specifically target vehicle sights’ (optics, periscopes), destroying them to blind the enemy.

The following vehicles will have access to this feature:

Mechanically, each individual soldier counts as a unit with no armor and one hitpoint – pretty much any enemy fire will kill a soldier instantly. Reduced squads will fire fewer projectiles or will fire slower. Wiping out all the soldiers in a squad results in that squad’s destruction. However, if your vehicle is destroyed, the infantry will not despawn and will continue to wreak havoc until killed. The original squad only despawns if you respawn your vehicle (for example, in PvE) and re-deploy a new squad somewhere else.

Beware: Infantry soldiers or squads do not respawn once killed – if you lose yours, that’s it for the battle, unless you use some respawning mechanism such as a Global Operations respawn or a PvE Field Repair Kit, in which case the vehicle will re-appear with its squad at full strength and loaded. Repair Points (in Global and Special Operations) and the new Ammo Refill feature also replenish your infantry squad.

Mobility-wise, infantry squads are mostly static with some limited movement such as repositioning to take a better shot, taking cover or actively jumping away from being killed by running them over.

The squads also have their own view range (from very low for the mortar team to very high for the snipers) and camouflage (from low to very high, depending on their type and course of action – logically, firing mortars are easy to locate while snipers in hiding are very difficult to uproot). Foliage works on them the same way as it does on vehicles.

Their weapons work the same way as standard projectiles do:

The firepower (penetration, damage) of each squad will scale with vehicle Tier. Spotting by infantry squads and their damage will, of course, count towards the statistics and rewards of the player who deployed them.

How to use[edit | edit source] 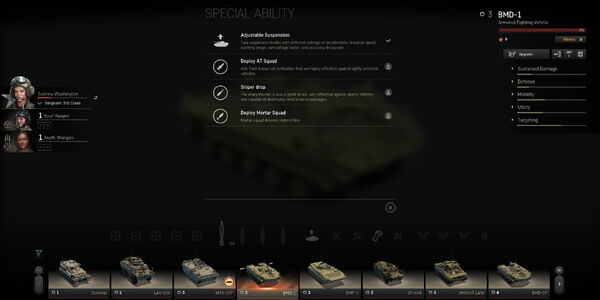 You can select Infantry squads in Special/Active Ability slot.

Squads will work as an Active Ability choice for the abovementioned vehicles. In other words, the vehicles in question will have to choose whether they want to have the ability to deploy infantry squads or to mark their targets.

In battle, each vehicle can only have one squad deployed at any given time and the types of squad cannot be changed in battle, only in your Garage. You deploy a squad by pressing the E key. The vehicle has to be standing or moving very slowly to deploy an infantry squad and there has to be enough room for the squad to be deployed.

Upon their deployment, the squad will take position (it is not moving by itself) and will start firing at the nearest target. An active squad can be retrieved by the same way it is deployed – by getting near it and pressing the E key. It can then be almost immediately re-deployed elsewhere.

You will, of course, have to find the most effective use for your infantry by yourself. The potential is endless:

Naturally, there are also ways of countering infantry. HE rounds and HE autocannons are especially effective and an accurate hit can wipe out the entire squad with one shot. It’s also entirely possible to just run them over with your vehicle.

Getting close to enemy infantry is a good way to make them stop firing – once a tank is near them (15 meters), they suffer from a “tank shock” effect and will, instead of firing, disperse, trying to take cover to avoid being crushed. Friendly tanks will also be able to destroy your team’s infantry, but this will have the same effect as firing on a friendly vehicle – the offending player will become marked as a teamkiller.