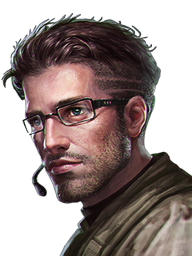 Maximillian König is an exclusive commander in Armored Warfare. He was only given to players who purchased a Founder's Pack in 2015.[1]

Maximillian is a universal commander. His basic skill Combat Experience IV help increase the Experience earned from battles, which can be useful to speed up vehicle progression. He shares the same Skill Field as Fyodor Sokolov.

Maximillian's dream has always been, and continues to be, commanding tanks. Quiet and reserved, he livens up only when at the controls of an armored vehicle. While in the military, he found himself somewhat isolated as a result of his single-minded focus on his career. Now as a contractor, he is a highly valued commander, and his crews always exhibit the utmost loyalty.