Marat Shishkin is a Dealer in Armored Warfare. His dealership's symbol is a bear.

Many of Shishkin's vehicles focus on firepower. Such trait is represented by his Russian tanks' single-shot damage and Light Tanks' burst damage potential. His BMD airborne vehicles progression branch would eventually lead to the powerful BMPTs. On the other hand, Shishkin also offers British tanks that have a different play style from other Main Battle Tanks: slow, defensive play with more emphasis on standing ground against enemy attacks.

Together with Sophie Wölfli, Marat Shishkin is one of the earliest dealers available in the game. New vehicles were periodically added to his pool throughout the game's early developments between 2015 and 2016. His vehicle pool underwent significant tier and roster changes as a result of Balance 2.0 on April 20, 2017.[1][2] Small changes and addition continued to apply at infrequent intervals - the last change occurred with the addition of Chieftain Mk.11 in November 2018.[3]

A very successful businessman before the political and economic fallout of the early 21st century, he uses his contacts in Eastern Europe to supply PMCs with a large quantity of old Warsaw Pact Arms, along with a few unique vehicles. 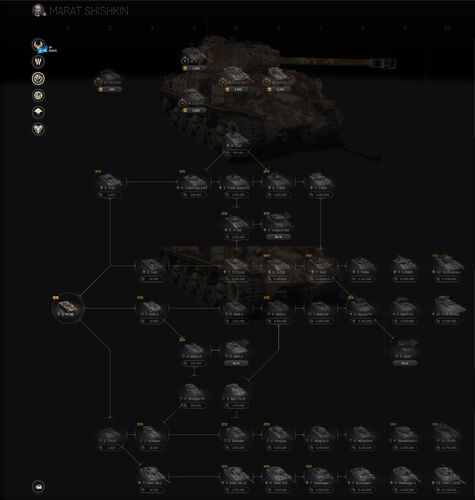