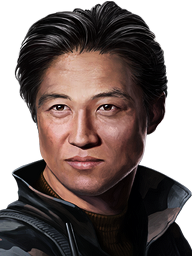 Kwon Han is a progression commander in Armored Warfare. He can be unlocked as the K2 Panther's upgrade screen.

Kwon has access to Fixed Position skills that boost the chance of dealing maximum damage with his vehicle's ammunition up to a maximum rate of 35%. On the other hand, his Potshot skills can further increase the dispersion of maximum and minimum damage values up to a maximum value of ±35%, meaning a shell that has a base damage of 500 with ±10% dispersion by default can deal as much as 725 damage or as little as 275 damage instead of just between 550 and 450 damage. In short, Kwon can be configured for a maximum chance of 35% to deal maximum damage, or increasing maximum and minimum damage dispersion by 35%, or somewhere in between with both skills for a more balanced build.

In addition to his probability-dependent skills, Kwon's basic skill increases his vehicle's acceleration for the first 120 seconds of battle, which is mainly relevant in PVP mode's Random Battles due to their short duration. His other supporting skills help further increase mobility and module durability.