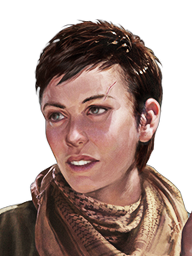 Kathryn Grey is a premium commander in Armored Warfare. She was first available as a reward in the first Storyline Campaign in 2017[1]. She returns as a purchasable commander on MY.GAMES Market periodically.

Kathryn is commander designed for use in Main Battle Tanks. Many of her skills favor close range combat by boosting a vehicle's agility. Although Main Battle Tanks tend to have low vision range, her Track And Destroy skill can temporarily increase vision range after receiving damage to potentially spot a sniping enemy. She also has skills exclusive to the Main Battle Tank class, including her basic skill, Heavy Armaments IV, which boosts her tank's reload speed.

Kathryn Grey grew up in Florida, the daughter of a car mechanic. She has always been a bit of a tomboy, tinkering with cars in her dad’s garage. Economic crisis forced her to enlist in the U.S. Army to help support her family. After the collapse of the American forces in Europe, she was offered a lucrative contract by Clayburn Industries that she could not refuse. New to the corporate world, she found it to be a poor fit to her wild, gung-ho personality. In 2039, after receiving the orders to kill civilians, she joined the Seahawk rebellion.