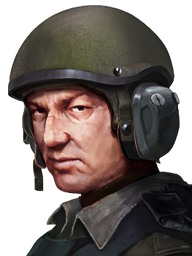 Juan Carlos Miramón is an progression commander available in Armored Warfare. He can be unlocked via the T-72A's upgrade screen for

As a teen and against his will, Juan served the Mexican Drug Cartels. He had and aptitude with machines, improvising armored vehicles and weaponry. Juan escaped to the US and was quickly employed by a PMC, soon discovering his talent for command. With his intimate knowledge of his vehicles, he is rarely stranded in battle.