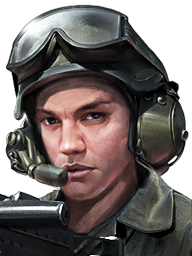 Joshua Seagrove is a premium commander in Armored Warfare. He was first available as a reward in the first Storyline Campaign in 2017[1]. He returns as a purchasable commander on MY.GAMES Market periodically.

Many of Joshua's favor sniping tactics, especially for Tank Destroyers; his basic skill boosts accuracy after successfully dealing damage from a long distance, and he has skills that boost camouflage factor while remaining stationary, as well as reducing camouflage loss after firing. On the other hand, he can also be configured to boost his vehicle's performance after destroying an enemy's module.

A child of a former British military officer, Joshua Seagrove lived his entire life in the corporate world of Clayburn Industries in England, entering the private the private Clayburn military branch and earning the rank of Major for his performance in several small-scale conflicts. He is highly intelligent, optimistic, and caring, but also somewhat naive in his beliefs. In 2039, after receiving orders to kill civilians, he joined the Seahawk rebellion.