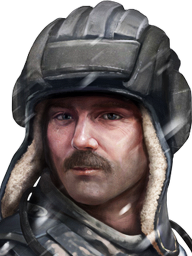 Fyodor Sokolov is a premium commander in Armored Warfare. He was first available as one of the rewards in the first Storyline Campaign back in 2017[1], and returns as a purchasable commander on MY.GAMES Market periodically.

Fyodor is a universal commander. His basic skill Combat Experience IV help increase the Experience earned from battles, which can be useful to speed up vehicle progression. He shares the same Skill Field as Maximillian König.

Growing up in Petrograd, Fyodor's love of critical thinking manifested as an interest in military tactics. He studied at the Combined Arms Academy of the Arms Forces of the Russian Federation, and upon graduation was appointed as a battalion commander. He became well known during his time commanding tank regiments, with a particular flair for executing flanking maneuvers. Once retired from active service and established as a military advisor, it was only a matter of time before this decorated veteran was recruited by a PMC.