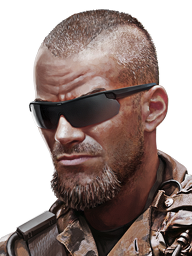 Douglas O'Reilly is a progression commander in Armored Warfare. He can be unlocked via the M48 GAU-8's upgrade screen.

Douglas starts off with three skills. He boosts overall rate of fire and vehicle acceleration up to 25km/h, but these come at the sacrifice of decreased camouflage factor and reduced acceleration at higher speeds. His other skills help increase vehicle and crew protection, reducing crew stats penalty from injury, as well as vision range. As such, he is a commander intended for frontline combat.

In his younger years Douglas O'Reilly went with the wrong crowd and ended up in jail more than once. After one such incident, he finally decided he had enough of the "free world" and chose the Middle East as the right place to make his fortune as a mercenary, founding a PMC called Evocati. He quickly gained notoriety for accepting any kind of jobs and for not being afraid to get his hands dirty, just the kind of ruthlessness the corporations were looking for. He'd end up working mostly for Clayburn Industries, which would prove his undoing. As the giant corporation collapsed, so did the Evocati. Disgruntled and alone, O'Reilly returned to the USA, only to find it occupied by Enigma. He joined the local Resistance almost immediately, putting his skills once again to good use.