Chapter 1. Attack is a Takeover & Defense PvE mission that takes place on the Chemical Plant map. It is the first missions of the Caribbean Crisis Special Operations.

Mojave Desert, September 6 2042 Security at a Clayburn Industries chemical plant has reported an attack by an unknown group. The ISD has sent in your squad to deal with it. You need to figure out what happened at the plant and repel any attacks 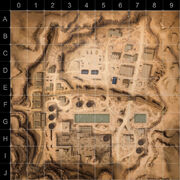 When the last cap (Escape from the Area) comes active, it will trigger multiple waves of enemys spawning north & south of the buildings east of the cap, wich on Insane can be extremly overwhelming.