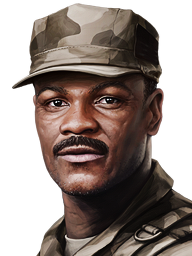 Austin Harper is a premium commander in Armored Warfare. He was first available as a reward in The Last Patriot Battle Path[1]. He returns as a purchasable commander on MY.GAMES Market periodically.

Austin has several skills that gradually improve his vehicle's performance as the player loses teammates in battle. Some skills only activate when Austin's vehicle is the only surviving member left in the team, but the performance boost can be very significant. Such traits makes him a potentially powerful commander in PVP Random Battle mode if the player can survive until the very end of a battle, but they generally do not shine in other modes as teammates can respawn mid-game. Alternatively, Austin can be configured with skills that help boost his and teammate vehicles' damage output in vicinity, as well as skills that generally boost his vehicle's performance without conditions.

Austin grew up in a poverty stricken family. He joined the U.S. Army right after school and would serve for almost twenty years, becoming one of the most decorated members of the U.S. military. Afterwards he enlisted in the Clayburn Industries security service in the late 2020s and, after its fall, switched over to the International Security Department.

Austin Harper is an inspiring and charismatic figure. His mere presence on the battlefield encourages his comrades to fight harder and deal more damage. Losing a team member brings out his inner fury, increasing his combat abilities; as a sole survivor, Harper can give a small army a run for their money.