Anthony Diaz is an exclusive commander available in Armored Warfare. He was given as a gift to players who registered and claimed him between December 19, 2014 and January 18, 2015.

Anthony's skills are mainly focused on repair speed and improving vehicle mobility in one way or another. To complement this he also has several other skills that are just generally helpful to have, such as module hp buffs, ammo swap speed, faster aim time, and module damage and crew stat improvements to name a few.

Due to his particular emphasis on mobility skills and repairing, it would seem Anthony is best suited for Main Battle Tanks and Light Tanks. Where boosting mobility, cutting down on repair time, and having some other helpful conditional or general skills will be a great benefit. 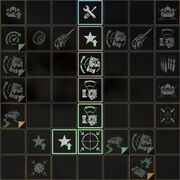 Maxed Out IV - Repair speed increased by 25% + 1% per commander level up to a total maximum of 40% faster repair speed.

Anthony was dedicated to his military career, beginning as an enlisted man and eventually receiving a battlefield commission for his exemplary service under fire. However, after reaching a ceiling in his career, he left for the private sector. He has found new challenges as an independent contractor, continuing to deliver above and beyond the call of duty.

These are the skills Anthony had before the commander skill rework in patch 0.22. As such these skills are obsolete and not representative of the current skills for the commander.