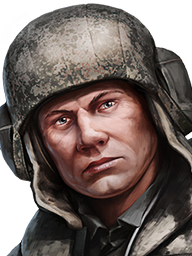 Andrey Zaytsev is a progression commander in Armored Warfare. He can be unlocked via Sprut-SD's upgrade screen.

Andrey's basic skill boosts his vehicle's camouflage factor significantly while remaining stationary, which is useful for Tank Destroyers designed for sniping. He also has skills that further complement his sniping role, including one that improves accuracy after successfully dealing damage at long distances, as well as those that reduce camouflage penalty while shooting and increase reload speed for Tank Destroyers only. Alternatively he can be configured to boast heavy damage against vehicle crew members.

Mathematics was Andrey's thing when he was young and he had no intention of going after a military career. However, during his military service he excelled as a gunner so he decided to remain in the army and later went to work for a private military company. Andrey demonstrated great skill in various operations and was promoted to tank commander.