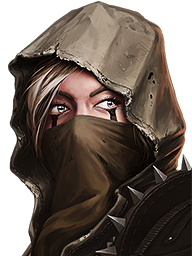 Alisa Korhonen is a premium commander in Armored Warfare. She was first available as a reward in Warlords of the Wasteland Battle Path[1]. She returns as a purchasable commander on MY.GAMES Market periodically.

Many of Alisa's skills are related to vehicle movement, such as increased mobility, reduced environmental damage from falling, or reduced accuracy penalty on the move. Furthermore, she can also increase her vehicle's maximum hit points as well as ammunition capacity. For aggressive Main Battle Tank gameplay, Alisa can be configured to deal heavy ramming damage against other vehicles.

Alisa's basic skill allows her to have a set chance to fire a missile with area-of-effect damage on a target enemy from off-map location whenever she successfully damages an enemy vehicle. This probability can be raised further with the Faithful Ally skills.

Alisa Korhonen hails from southern Finland. She was born in Espoo (near Helsinki) in a family of a neurosurgeon and followed in her father’s footsteps by becoming doctor. When her father was lost on a humanitarian mission in the Middle East, Alisa enlisted in the ISD and went looking for him, only to have discovered him to be murdered by terrorists. Vowing revenge, she joined local tribes to battle the warlord menace.