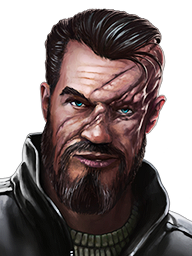 Alexander Cortez (also spelt Aleksander Cortez) is a premium commander in Armored Warfare. He first was first available as part of purchasable bundles[1] and later returns as a purchasable commander on MY.GAMES Market periodically.

Alexander's main feature is his basic skill, which boosts the chance of dealing maximum damage with his vehicle's ammunition. This rate becomes 100% when his rank is at Colonel (Rank 15) with four adjacent skills of the same name acquired, thereby eliminating the ammunition damage randomization completely. In addition to agility-oriented skills, his other supporting skills help improve module durability or mitigate negative effects from battle damage.

Alexander was born into a family of a Russian actress and a Cuban officer. He left home hen he was a teenager and traveled around South America, participating in local conflicts. During his travels, he made loyal friends. Together, they joined mercenaries and created the Black Eagle squad.